Soft-EPi launched red In GaN EPi wafer for the first time in Korea that improves performance of Micro LED [May 3. 2022] 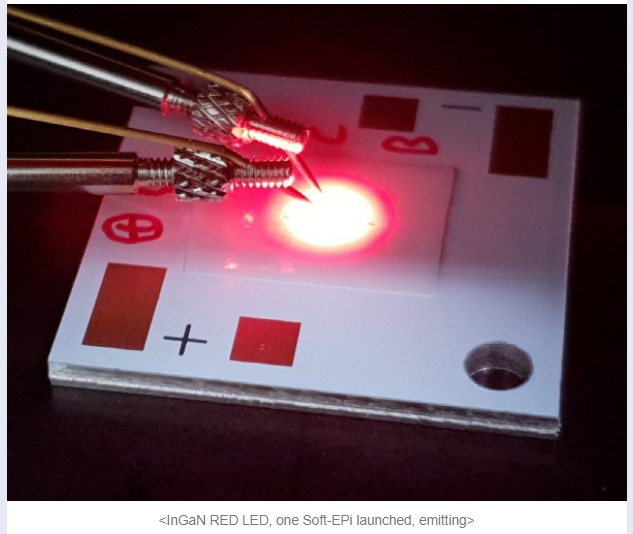 AlGaInP has a disadvantage that the smaller it gets, the efficiency of the chip drops dramatically due to the high surface recombination rate. Resolving this issue will result in poor LED temperature characteristics. Also, they can be mechanically weak, so the yield during the transfer process drops dramatically. The price of wafer is high, which increases the process cost.EPi wafer with red gallium nitridehas received high interest in the related industry as an alternative to solve this problem. It is ideal to make red color with gallium nitride, which has same component as blue and red micro LED. However, due to the technical difficulty, there are only 4-5 companies globally who can produce red light with gallium nitride. However, it is impossible for micro LED developers to get red gallium nitride EPi, because the manufacturers have exclusive contract with META, Google, and others, and they are having difficult time to research and development (R&D).Soft-EPi drew attention from industry when they developed and demonstrated red gallium nitride last year. Until recently, they have been focusing on performance improvement, and they have decided to launch EPi wafer with red gallium nitride. They plan to supply it to micro LED developers who want to purchase them.EPi wafer with red gallium nitride can ultimately make red, green, and blue (RGB) on one wafer at a time, and build a foundation that can skip the transfer process or wafer bonding process. Soft-EPi has successfully integrated red and green into one wafer, and plans to integrate and demonstrate blue within this year.In-sung Cho, head of Soft-EPi research center, said, "We still need to increase efficiency, but it is not insufficient compared to global companies. We will continue to work with customers to improve performance."